Inflation and your Average Salary

The goal of a defined benefit pension plan like your Teachers' Pension Plan (TPP) is to provide long-service members with a reasonable income replacement. For example, someone making $80,000 and retires with $48,000/year pension would have a sixty percent income replacement provided by the TPP ($48,000/$80,000 = 60%).

Aside from how much pensionable service a member may have, the simplified TPP pension formula1 shown below demonstrates that your average pensionable salary is also important.

The TPP's average salary is calculated by taking the average of your earnings for the years you contributed to the plan2. The TPP protects against the negative effect of inflation by annually increasing past earnings (referred to as pre-retirement indexing). This ensures your average salary is higher than it otherwise would be and closer to your actual salary at time of retirement.

Let's assume Morgan has been contributing to the plan for 20 years and is retiring. Morgan's starting salary from 20 years ago was $47,000 and retires with a salary of $80,000.

Because the average salary will be calculated using all 20 years, Morgan would not want that low salary of $47,000 used in the calculation of the average salary (as it would drag down the overall average). To avoid this, the plan provides an annual inflation adjustment3 to the first year's earnings (i.e. the percentage increase in average wages in Canada as reported by Statistics Canada). While this example only deals with the first year's earnings, all past years are adjusted in a similar manner.

It is important to understand that your average salary is very sensitive to the size of these annual inflation adjustments. Let's look at two simple examples:

While the legislation governing the plan requires indexing of past earnings, it also makes the granting of indexation contingent on the plan's funded status (i.e. plan must be over 100% funded to award any indexation). That is why the TPP undergoes an annual valuation to determine whether the plan can afford to adjust past earnings for inflation or not.

As you saw in the above example, the level of indexation on past earnings can have a direct effect on your average salary so you may want to take this into consideration when choosing a retirement date. To help members in this process the Commission intends to communicate related information in a timely fashion.

The maximum level of indexation that may be awarded, known as the Target Salary Indexation, is known by April and will be posted here. The plan's annual valuation exercise (which calculates the funded status of the TPP) is not finalized until late June, so the Commission will communicate the plan's ability to award indexation early each July. 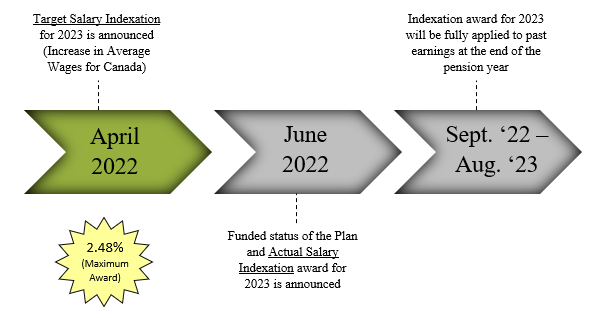 The purpose of the annual valuation is to determine if there is enough surplus funds to award the Target Salary Indexation. The following chart illustrates the process used to determine what level of indexation will be awarded in the following pension year. 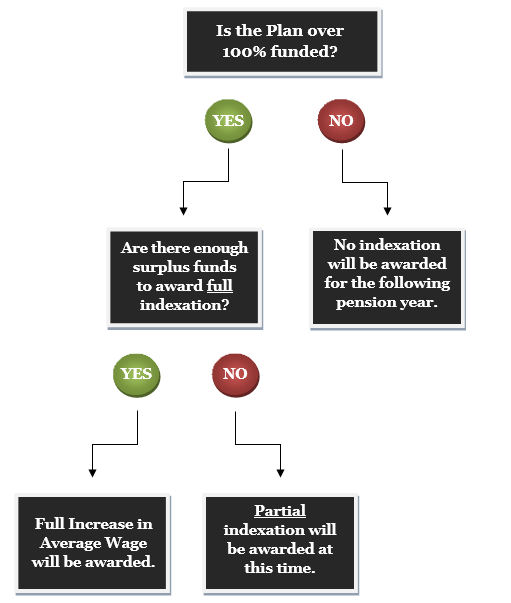 For a history of awarded indexation percentages, see the Salary Indexation Award Archive.

Notes:
1.  This formula is valid for pensions payable before age 65. For salaries below CPP's Yearly Maximum Pensionable Earnings, the 2% benefit is comprised of a 1.3% lifetime benefit and a 0.7% temporary bridge benefit, payable from the date of retirement to age 65.
2.  Under pension reform in 2013, all members had their "best-5" average salary calculated and that amount was credited to each year prior to 2014.
3.  Plan must be over 100% funded to award indexation to active employee's past earnings.